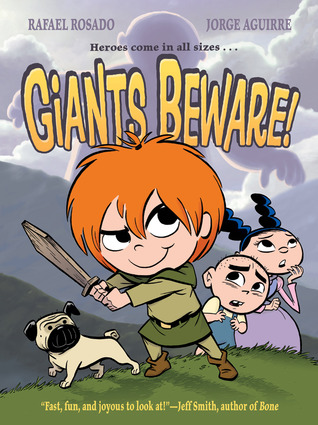 Make way for Claudette the giant slayer in this delightful, fantastical adventure!

Claudette’s fondest wish is to slay a giant. But her village is so safe and quiet! What’s a future giant slayer to do?

With her best friend Marie (an aspiring princess), and her brother Gaston (a pastry-chef-to-be), Claudette embarks on a super-secret quest to find a giant—without parental permission. Can they find and defeat the giant before their parents find them and drag them back home?

Giants Beware! offers up a wondrous, self-contained world in the tradition of the very best of Pixar. Claudette and her friends will have you laughing out loud from page one.

What was your inspiration for the book?

Rafael:  I’m not entirely sure.  I recently went through some old sketchbooks of mine and realized that I’d been drawing a character that looked kind of like our main character, Claudette, years before we even began the book.  I guess I’ve had this character of this girl with a lot of spunk in my subconscious for a while.  I’m also really into French comics and that influenced the look quite bit.

Which character do you identify with and why?

Rafael:  I’m not impulsive like Claudette.  I’m probably most like Gaston.  He thinks before taking the leap.  He worries a lot.  That’s probably more like me.

Jorge:  I wish I could say I was like Marie.  Marie doesn’t care what other people think of her.  In this book, she aspires to be a princess and other kids make fun of her, but she doesn’t pay them any attention.  She’s very confident and smart.   I wish I were more like her.  I also wish I were like Claudette.  She’s brave, reckless, and impulsive.  But I’m not like her either.  Like Rafael, I’m probably most like Gaston.  I’m a little nervous and I love sweets.

How did your partnership begin?

Jorge:  We’ve known each other since we were both in film school at the Ohio State University in Columbus. I was in a writing class at OSU, and of all the bad scripts in class, mine was one of the least bad scripts, and so it was chosen to be produced with Rafael as the director.  We spent a good month or so filming a very bad film together.  That is how we became friends.

Rafael:  Fast forward years later to Columbus, Ohio circa 2007.  We were at John Novak’s house (our colorist and a mutual friend).  I told Jorge about these characters I had bouncing around in my head and a story about a giant.  I went off and wrote and drew up the ideas I had so far.  I gave them to Jorge, and told him to run with it.  And he ran.

Rafael:  I drew the whole thing in Photoshop, on a Wacon Cintiq (a tablet-monitor). I like drawing digitally because it gives me a lot of flexibly down the line for edits and moving things around. John Novak and Matthew Schenk colored the book.  We used a DropBox to move files around between John Novak and Matthew Schenk (color), Jorge, and me.  Jorge and I would meet every once in awhile either in person in Columbus or via video chatting to go over pages and notes.

Jorge:  I used Scrivener to collect all my notes, and Final Draft to write the script.  I lettered the book in Illustrator, which gave me the chance to do one last rewrite.  I’m always rewriting, and I always tried not to send any script pages to Rafael until they were fully baked or else he’d start drawing right away.

What’s up with Claudette’s dad?

Do you mean like why is he missing his legs and an arm?  Well, he fought a battle against a terrible dragon and lost.  You always hear about these great warriors who slay dragons.  Well, Augustine is a great warrior who had a very bad day.  And now his favorite sword is sitting in the belly of Azra the dragon.  But that’s a story for another day. 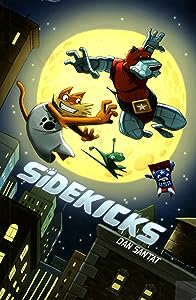 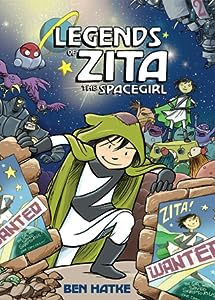 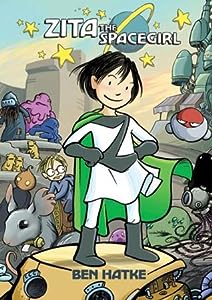 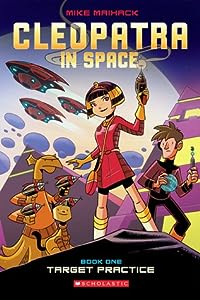