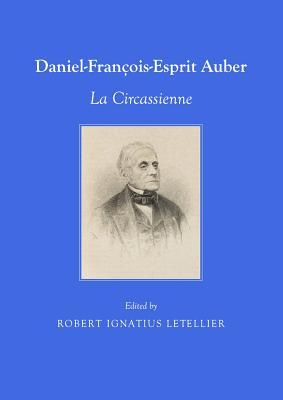 Daniel-Francois-Esprit Auber (1782-1871), once one of the most well-known and well-loved names in French 19th-century opera, came later in life than many famous composers to his art, yet had one of the longest and most successful careers. He studied with Cherubini after abandoning an initial attempt to establish a career in commerce, and experienced his first real triumph at the age of 38 with La Bergere Chateleine (1820). His subsequent association with the librettist Eugene Scribe (1791-1861), a collaboration that lasted until Scribe's death, became one of the most famous and successful partnerships in musical history. Works such as Le Macon (1825) and La Muette de Portici (1828) cemented Auber's popularity with the public and drew official recognition and honours. In 1829 he was appointed a member of the Institut, in 1839 Director of Concerts at Court, in 1842 Director of the Conservatoire, in 1852 Musical Director of the Imperial Chapel, and in 1861 Grand Officer of the Legion d'Honneur. Auber's grand opera La Muette de Portici (also known by its hero's name as Masaniello), a work of great significance in the history of opera, is set against a background of revolution and uprising - a situation that Auber knew only too well. He lived through four French Revolutions (1789, 1830, 1848, 1870), dying at the advanced age of 89 in the desperate conditions of the Commune, of a long-standing illness aggravated by the dangers and privations that attended the Siege of Paris. Auber had always loved his home city, and was not prepared to leave it, even after his house had been set on fire by the petroleurs et petroleuses. Ironically, a mark had been placed against the house of the composer of La Muette de Portici, a man so successful in depicting revolutionary fervour that a performance of this opera in Brussels in 1830 had helped to inspire the revolution that led to the separation of Belgium from Holland. Auber's charming and graceful overtures were once staples of the light Classical repertoire, known and loved everywhere. His gracious melodies and dance rhythms had an overwhelming influence on piano and instrumental music, and on the genre of Romantic comic opera, especially in Germany. His operas, apart from Fra Diavolo (1830), have virtually passed out of the repertoire. Contemporary audiences are not attuned to Auber's elegant and restrained art, accustomed as they are to verismo, Wagnerian transcendentalism, and twentieth-century experimentalism, but those willing to listen are rewarded by works that retain all their freshness, delicacy and charm. La Circassienne, an opera-comique in three acts, with libretto by Eugene Scribe, was first performed at the Opera-Comique (Deuxieme Salle Favart), on 2 February 1861. The story is based on the novel Les Amours du chevalier de Faulas (1787-90) by Jean-Baptiste Louvet de Couvray. The locale is the Caucasus and Moscow, around 1840. A group of bored Russian officers, snowed in inside their fort in the Caucasus, plan to put on Dalayrac's Adolphe et Clara. Alexis, who has just related an anecdote of how he disguised himself in women's clothes to carry out an errand, is chosen for the female role and dressed a la Circassienne since no other costume is available. The new commandant, General Orsakoff, falls in love with Prascovia. The Circassians attack by surprise and carry off Prascovia and Orsakoff's niece and ward, Olga, but the Russians manage to escape. Back in Moscow, the painter Lanskoi tries to dissuade Orsakoff from finding Prascovia by announcing that she has entered a convent. The overture captures something of the pert and satirical aspects of the potentially louche plot, reflecting an appropriate tone for the subtle inversions of expectations and values endemic to this storyline. It unfolds the central themes of the opera, nearly all of them taken from the extended act 2 finale - the Harem Scene. In act 2 the chorus of odalisques is delightful: the composer had never written anything more vaporous and ethereal. Indeed, La Circassienne provides a mixture of some fine late harmonic thoughtfulness, and also some routine application, as in the repetitions of rhythmic patterns that can seem a weakness. In act 3 the couplets for the painter Lanskoi (Il aime trop) are written with malicious finesse, and were encored. The orchestration is a constant feast for the ear, coupled as it is with a most original and penetrating harmony. This sense of heightened expression is part of the slightly extended or Mannerist tendency discernible in this work. It is nowhere better illustrated than in the vocal writing for the two principal roles. The part of Alexis with its ambiguous transvestism finds a vocal correlative in its very high tessitura, with an almost exaggerated extension in alt. Montaubry excelled in creating the unusual role of Alexis, thanks to his slight physique and head notes. Few tenors could have tackled this as victoriously as he did. The role of Olga is also extremely demanding. The original cast was: Achille-Felix Montaubry (Alexis); Mlle Monrose (Olga); Barielle (Orsakoff); Joseph-Antoine-Charles Couderc (Lanskoi); Eugene-Louis Troy (Aboul Kasim); Charles-Francois Duvernoy (Soltikoff, a Russian captain); Ambroise (Perod, a Russian brigadier); Davoust (Irak, one of his officers); Paul-Pierre Laget (Boudour, a eunuch); and Mlles Prost and Bousquet (Zoloe and Neila, wives of Aboul Kasim). The work was in the repertoire for the year of 1861 only, achieving a total of 49 performances. Perhaps because of its rather ambiguous subject matter, the opera did not enjoy further productions outside Paris. But for all its risque implications, this libretto was set with great success by Franz von Suppe for Vienna in 1876, under the title of Fatinitza.