The Greatest Defender Of The First Amendment 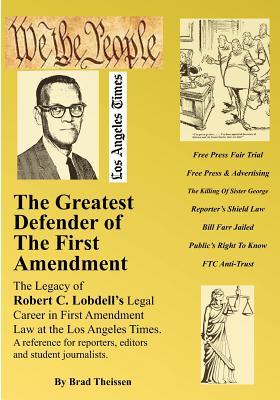 During the tenure of Otis Chandler as Publisher of the Los Angeles Times, in the 1960s to 1980s, the newspaper's growth in staff, pages and investigative stature, opened it to numerous lawsuits over advertising, libel, privacy and the public's right to know. Formerly powerful elected officials, down to private citizens, sought to control and deny the newspaper's First Amendment right to publish the news. Under the leadership of Robert C. Lobdell as General Counsel, the Los Angeles Times defended it's First Amendment right to publish the news, and in turn created a body of law that exists to this day, to serve newspapers across the United States in fulfilling their role in their communities as free press. This book contains the legal cases the Los Angeles Times was a party to. and won, in the areas of Free Press and advertising, fair elections, fair trial, reporter's shield, personal privacy, defamation, libel, false light, and more. As well as interviews with Mr. Lobdell, by Times staff biographers. Every legal matter Robert C. Lobdell worked to protect The Press for and from, from 1965-1986, affects every newspaper's daily to-do list: privacy and defamation vs. the public's right to know, legitimate public interest, the unfettered right of a newspaper to publish - or not to publish - advertising copy, a Reporter's right to protect sources... Robert C. Lobdell "went to the mat" over First Amendment matters with the Federal Trade Commission, Hollywood movie producers, the porn industry, community activists, Judges, and Mayors. The result, is a stronger Press, and a free-er Free Press. How so? The victories Robert C. Lobdell scored in California, some resonating all the way up to the Federal appeals court branches of the US Supreme Court, have been used as precedents in many dozens of cases across the US. Read the cases for yourself. Learn from them, as though you were the Reporter of the day, covering these cases. Unravel and demystify how legal cases evolve. Strengthen your journalistic skills, as you read through, and become incrementally more educated about these First Amendment matters Robert C. Lobdell protected - for newspapers as private businesses, for Reporters and The Press. From the Author: "In compiling - and reading - all of the documents that I have presented here, I have come away with a new sense of education, enlightenment, and empowerment. "With expansion comes exposure, and litigation. During the next 25 years, the Los Angeles Times was involved in legal cases heretofore unheard of, from powerful politicians now under scrutiny, to ordinary people caught up as background extras in lifestyle photos, to members and leaders of diversified social cultural change wanting, but unwanting, of the glare of the public spotlight on the public stage, and to reporters being used as witnesses in civil and criminal courtroom cases. "This was in this 25 year period in the history of the Los Angeles Times, and the US newspaper business, that Robert C. Lobdell oversaw legal cases in which the Los Angeles Times defended itself from plaintiffs, and in the end, won; and thus created new Law that stands to this day to serve and protect the free Press." The First Amendment to the US Constitution "Congress shall make no law respecting an establishment of religion, or prohibiting the free exercise thereof; or abridging the freedom of speech, or of the press; or the right of the people peaceably to assemble, and to petition the Government for a redress of grievances."