Picnic in the Park (public sex tease and denial) 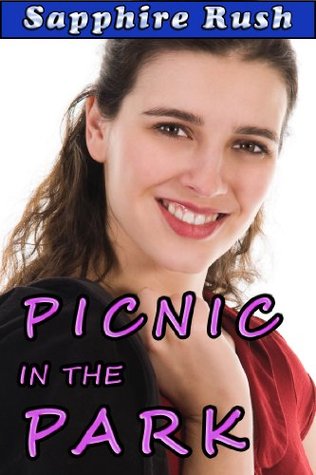 Suzie isn't afraid to withhold sex to get what she wants from her boyfriend Percy. He's got willpower, but after two weeks, he's forced to give in to her demand for a picnic in the park. There's more than just food on her mind, though, and it's time for her to end Percy's enforced chastity...but that doesn't mean she can't make him suffer first!

Life is good about now. Real damn good. I almost don't want to end the moment, to just keep lying here until the sun drops out of the sky. But dammit, the boy's suffered enough, and having set out on this journey with impure intentions, I really don't think I could hold myself back from him for that long.

So I lift my head very slightly off his chest, and I blow some warm breath across his proud nipple. His head leaps up, and he's staring a hole in me. I can see the desire raging inside him, burning through his eyes. It sends a beautiful thrill to all my nerves at once, knowing how badly he wants me.

"Yes?" I say sweetly, all innocence and light.

"Whyever not?" I prop my head up on both fists, right next to his chest.

"Look at where we are!" he says, waving a hand around and up at the sky. "We're at the park, for God sakes!"

"What does that matter?" I say, still keeping my voice sweet and sincere.

His eyes widen and he props himself up on his elbows to look down himself at me. "What does that matter?" he says. "Just...just look!" He gestures wildly again.

"Why don't you look?" I say. He looks very confused, and I reach out and flick that nipple with my finger. He jumps. Quite a long way. He looks quite shocked at how forward I'm being.
"Yeah!" he says. "And I see people!" He points down the hill at the path.

"Didn't you hear what I said earlier?" I say, allowing myself a mild hint of my full exasperation at how unobservant and closed-minded he's being.

"What when now?" Well, I've got him completely confused, at least. That's good.

"When you were hauling that basket up this hill", I remind him. "Our own private VIP booth?"

"We've been watching them all down there how long now?" I say. "And how many of them have looked up here?"

"About none", I say, with a heavy air of finality, my hand creeping down his side towards the top of his tight jeans. "We might as well be at home. In the bedroom." And I punctuate that last word with a hard, insistent squeeze of his incredibly firm butt.