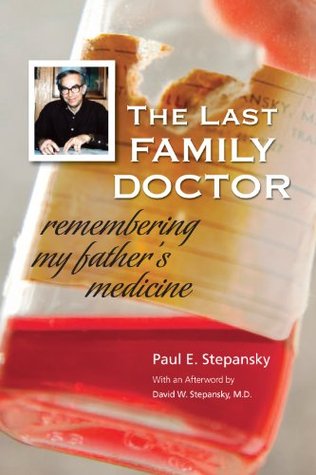 "The Last Family Doctor is a wonderful book that blends a historical perspective that perfectly captures an earlier era in medicine with a son's loving portrait of his father. An enjoyable read for everyone, medical students and those planning to become physicians will find in Dr. William Stepansky an exemplary and inspiring role model." -Howard K. Rabinowitz M.D., Jefferson Medical College, author, Caring for the Country: Family Doctors in Small Rural Towns

“In learning about the life of Dr. William Stepansky, one of the last of a breed of true general practitioners, we learn much about the enduring possibilities for genuine human healing. In important ways, the author's father represents the doctor we all deserve.” - Daniel Carlat, M.D., publisher of The Carlat Psychiatry Report and author, Unhinged: The Trouble with Psychiatry

“A unique and compelling account of mid-twentieth century American medical practice. Paul Stepansky's portrait of his father reminds us of the hurdles in the path of immigrants and minorities of the post-war era who wished to practice medicine and the triumphs of one who not only persisted, but also set a standard for medical practice that has all but disappeared in the late 20th and early 21st centuries. This book deserves a wide audience of professional and lay readers alike." - Howard I. Kushner, Ph.D., Emory University and author, A Cursing Brain? The Histories of Tourette Syndrome

In The Last Family Doctor, historian Paul Stepansky tells the moving and uplifting story of his father, William Stepansky, a remarkable family doctor who touched thousands of lives. Beginning in 1953, he provided all that scientific medicine had to offer the small rural communities he served in southeastern Pennsylvania. And he did so with an embracing humanity, an ability to contain the pain, suffering, and anxious concern of others that is integral to the all but lost art of medicine.

William Stepansky was born in Bucharest, Rumania in the winter of 1922, the child of Russian Jews who fled the Kievan Pogroms that followed World War I. The “making of a doctor,” as recorded herein, traverses topics far removed from the life experience of contemporary physicians: intensive violin studies, pharmacy education, army engineering training, battlefield surgery in France and Germany, laboratory work in Czechoslovakia, and admission to Jefferson Medical College in 1947, the latter a result of extraordinary perseverance in which the violin, strange as it sounds, played a part.

The Last Family Doctor is not only a memoir. It is a unique window into understanding what has happened to primary care medicine in America over the past six decades. Paul Stepansky concludes with a measured assessment of what we have gained, but also what we have lost, in the death of the postwar GP who cared for individuals and their families from birth to death. In so doing, he challenges us to reflect anew on what we need, what we want, and what we can reasonably expect, from our doctors.

The first to take up the challenge is the author’s brother, David Stepansky, an internist who practices general adult medicine in the very communities served by his father a half century ago. His thoughtful Afterword, which compares his father’s medicine with his own, rounds out the compelling story of a quiet hero who in important ways “represents the doctor we all deserve” (Daniel Carlat, M.D.).