An Overview of the Nonprofit and Charitable Sector 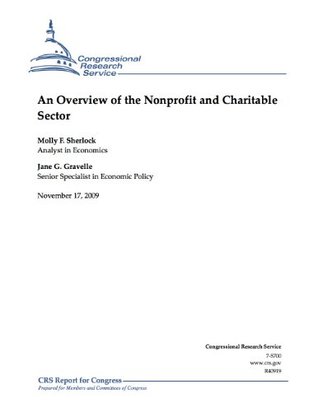 The next section reports on the size and scope of the charitable sector. Charitable organizations are estimated to employ more than 7% of the U.S. workforce, while the broader nonprofit sector is estimated to employ 10% of the U.S. workforce. In 2009, the charities filing Form 990 with the Internal Revenue Service reported approximately $1.4 billion in revenue and reported holding nearly $2.6 billion in assets. Nonprofit institutions serving households (largely charities) constituted more than 5% of GDP in 2008.

The third section of this report examines how charities are funded. Revenue comes from a variety of sources, including private contributions, payments (fees for service), government grants, and investment income. Revenue sources vary significantly across different types of charities: charities involved in health care (including nonprofit hospitals) and educational institutions rely heavily on private payments while arts, culture, and humanities charities and environment and animals charities are more reliant on private contributions. Private contributions to charities are of particular interest as charitable giving may respond to changes in the tax code. As the recent economic downturn has increased the demand for goods and services provided by a number of charities, the impact of the business cycle on funding is also discussed.

The fourth section provides an overview of the charitable sector’s relationship with government. From a theoretical perspective, economics suggests that the government should subsidize activities that are either public goods or have positive external effects. It can be argued that some charitable activities possess these qualities. The costs to the government of providing grants, allowing charitable contributions to be tax deductible, exempting investment income of charities from tax, and providing property and sales tax exemptions are presented. The oversight role of the government is also reviewed.

Finally, the report concludes with policy considerations. This section opens by surveying what policy options are considered most important by charitable organizations themselves. Building on this, a number of policy options are examined, including (1) increasing government grants and subsidies to charitable organizations; (2) creating an oversight agency within the federal government to gather data, conduct research, and advocate for the charitable sector; (3) implementing policies designed to help charities and foundations in economic downturns; (4) changing the itemized deduction for charitable contributions by limiting, converting to a credit, or making the deduction more widely available; and (5) a variety of other tax issues.