Crisis! A Commentary on the Book of Revelation Volume 1 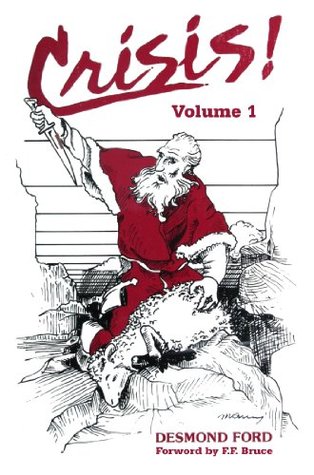 Dr F. F. Bruce was Emeritus Professor at the University of Manchester when he wrote this Foreword for Dr Ford's Crisis! A Commentary on the Book of Revelation.

To his commentary on Daniel Dr. Ford has now added a detailed study of the Revelation to John, and it is a pleasure for me to write a few words in commendation of this work as I did for its predecessor.
Since the exegesis of Revelation is a subject on which I myself have published some reflections, readers will know that not all the conclusions reached by Dr. Ford coincide with my own views. His confessional background is different from mine; to me, for example, the New Testament antitype of the sabbath is that divine rest into which "we who have believed" find entrance.

His estimate of the historical and geographical reference of many of the details of Revelation differs from mine; to me the book is primarily intelligible in the light of the church's experience in the Roman Empire in the second half of the the first century A.D.

But, just because the visions of John were seen in that contemporary context, they have a permanent and universal relevance, especially for readers living in a situation not unlike that in which John and his first readers lived. And Dr. Ford's study deserves special commendation because of the clarity with which it brings out that permanent and universal relevance. He has read widely in exegetical literature, as the wealth of quotation in the following pages shows; yet throughout he has exercised his own judgment on the meaning of the text. Above all, the book of the Revelation emerges from his study as a powerful witness to the authentic biblical gospel.

It is always a source of pride and joy for me to greet and commend the work of a former student, but when the work proclaims the faith of the gospel so eloquently as Dr. Ford's work does, the pride and joy are doubled.

At age ten, the young Desmond Ford spent the summer holidays with his spinster Aunts in North Queensland. The clouds of World War 2 were beginning to gather. They were but portents of more sinister clouds that Des discovered that summer. He writes:

"But my main memory of that stay is the night I sat under a light on the verandah, probably a typical balmy sea-coast evening in a land where winter was unknown, and began to read the book of Revelation. Most, if not all, of the book was devoured that evening. Never will the impression be forgotten! Thunder, lightning, beasts, women (beautiful and otherwise), angels (of both camps), scenes of heaven and hell, altars, blood and incense, horrific horsemen from above and dreadful winged monstrosities from below, heavenly orbs darkening, seas and rivers turning to blood, vials of wrath being poured out, myriads of wicked beings on the march, white horses from heaven, a giant angel straddling sea and land, eagles with their cry of "Woe!" and ultimately, like the soothing final strains of a great symphony, the irenic scenes of the New Jerusalem with its Tree of Life and the crystal stream from the throne of the Lamb.

What was it all about? I went to bed with my mind whirling, to dream dreams even more complicated than those of John on Patmos. . . ."

Crisis! is the fruit of that evening which took forty years to mature. The result is a scholarly and challenging insight into this fascinating Bible book called Revelation.