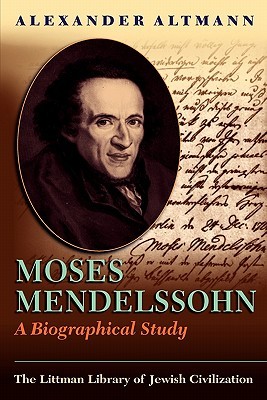 Alexander Altmann's acclaimed, wide-ranging biography of Moses Mendelssohn (1729-96) was first published in 1973, but its stature as the definitive biography remains unquestioned. In fact, there has been no subsequent attempt at an intellectual biography of this towering and unusual figure: no other Jew so deeply rooted in the Jewish tradition was at the same time so much a part of the intellectual life of the German Enlightenment in the second half of the eighteenth century. As such, Moses Mendelssohn came to be recognized as the inaugurator of a new phase in Jewish history; all modern Jews today are in his debt. Altmann presents Moses Mendelssohn in strictly biographical terms. He does not attempt to assess his significance with the hindsight of historical perspective nor to trace his image in subsequent generations, but rather to observe his life from the period within which it was set. Altmann has written an absorbing and compelling narrative that makes a whole epoch come alive with great drama, for Mendelssohn's life was a kaleidoscope of the European intellectual scene, Jewish and non-Jewish.
As both a prominent philosopher and a believing Jew, Mendelssohn became a spokesman for the Jews and Judaism; he was one of the rare figures who become the symbol of an era. Through Altmann's skilful use of hitherto unpublished archival material, the reader is introduced to the vast array of people-men of letters, artists, politicians, scientists, philosophers, and theologians-with whom Mendelssohn was in contact, and sometimes in conflict. What was Mendelssohn's Judaism like? To what extent did the disparate worlds of Judaism and modern Enlightenment jostle each other in his mind and to what degree could he harmonize them? These questions are not easily answered, and it is only in the aggregate of a multitude of accounts of experiences, reaction, and statements on his part that the answer is to be found. Alexander Altmann's analysis of this wealth of material is extraordinary in its discernment, subtlety, and clarity of expression.
This masterly work will be of interest not only to those who are concerned with Jewish intellectual history but also to those interested in eighteenth-century cultural and social history, philosophy and theology, literary criticism, aesthetics, and the other areas of intellectual activity in ferment at that time. The general reader will also find much of contemporary relevance in Mendelssohn's life, not only because of his exemplary devotion to reason and tolerance, but also because of his lifelong struggle with the basic dilemma of the Jew in the modern world: the attraction of assimilation versus the singularity of Jewish life, and the preservation of Jewish identity versus integration in the wider society.