Charlotte Mason is known today as a British educationalist from the early 1900's whose ideas and philosophies are currently being rediscovered by modern day home schools and private schools throughout the world. Many of Mason's modern readers may be unaware of her devout spiritual life and her deeply moving poetry. This is the second volume of a six-volume set of Mason's poetic writings on the life of Christ.
This volume will appeal to Mason's current fans, to Christians of many persuasions, and to anyone who enjoys reading epic and/or religious poetry.
SOME OPINIONS OF THE PRESS ON "THE SAVIOUR OF THE WORLD" VOL. II. HIS DOMINION
"These reviews/comments followed the original release of His Dominion in 1908."
Miss Charlotte Mason has now given us the second instalment of her elaborate work in verse on "The Saviour of the World." . . . Miss Mason renders into graceful and original verse part of the story of Christ as found in the Gospels. She seeks to cover each incident in His career, and each notable saying to which He gave utterance, in a single poem, the series to form a complete story. Her obvious sincerity and the high aim which is everywhere apparent make her pleasing verses singularly attractive. She is reverent throughout and always dignified.
-Dundee Advertiser
Miss Mason has much of the subtle skill of Browning, and her effusions breathe everywhere a spirit of deep devotion to "The Saviour of Mankind."
-Catholic Times
Miss Mason's gracefully versified tractate in Christian theology-for that is what the poem is-should be read without weariness by the devout . . . On its literary side the book will readily evoke the admiration and sympathy of readers who like to have familiar lessons of Christianity refreshed by good workmanship in metrical art.
-Scotsman
The first volume met with a very cordial reception, and now the talented authoress gives her second volume to the world. . . . The authoress employs the choicest language, and shows great skill in versification. The whole work, in fact, aims at giving the whole of the Gospel story in verse-not a small task, by any means, but one for which Miss Mason seems to be specially endowed.
-Western Mail
Miss Mason here continues what she modestly describes as a "paraphrase in verse" of the Gospel story. As the writer aptly remarks, such a theme as this, in its sacred utterances and dramatic situations, finds a better medium of presentation in poetry than in prose. The first stage or act of the inspired narrative, "The Holy Infancy," being completed, Miss Mason passes on to the Ministry of Our Lord at its commencement and first teaching (Sermon on the Mount and earlier parables), and first miracles . . . the sequence of the work is marked no less by the skill of the author than by the reverent spirit in which it is composed. Echoes of George Herbert and of Isaac Williams are to be caught here and there in the various pieces, as. E.g. where paraphrasing a passage in the Sermon on the Mount, Miss Mason writes: -
" "Nay, keep thy soul at eve,
Nor e'er perceive
The heavy odour of an unchaste thought.""
It would be difficult to express better the "atmosphere" of the new Paradise "regained" by Christ in place of that which was lost.
-Bookseller
The same careful, reverent handling of holy things characterises this new volume, which, like the former, is a paraphrase, in blank verse chiefly, of the Gospel narrative.
-Guard 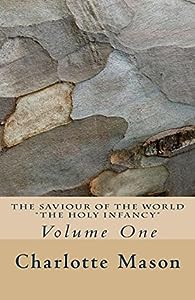 The Holy Infancy (The Saviour of the World #1)

The Kingdom of Heaven (The Saviour of the World #3)

The Bread of Life (The Saviour of the World #4) 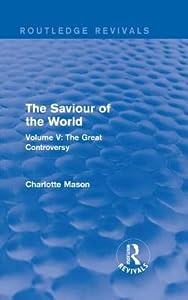 The Great Controversy (The Saviour of the World #5)