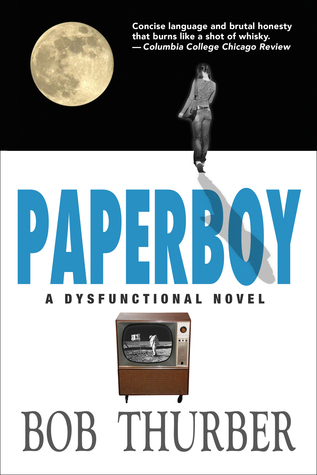 Unflinchingly honest, and sure to shock some folks, this troubling story about a troubled brother and sister trying to survive parental abuse (and self abuse) in the summer of 1969, the year of the moon landing, will resonate like a Buddhist’s come-to-supper bell. (Caution: If you experienced severe trauma as a child, you might want to be careful turning pages. This "emotionally raw," coming-of-age novel deals with difficult some severe adolescent issues.) Remarkably, PAPERBOY is a display of endurance, and a document of an era. Once you’ve met Jack and Kelly, you’ll not soon forget them.

Set in the summer of 1969, PAPERBOY is an " uncommonly brave book" meant for mature readers. As one critic warned, "It is not for the feint of heart. But it is a story beautifully written, rendered with a love and compassion that feels more like a memoir than a novel. Mr. Thurber is terse and surgical."

Renown for his gritty, visceral short stories, Bob Thurber adopts a similar approach in his debut novel, using a series of linked vignettes (150+ mini-chapters) to reveal a harrowing tale of two “lost children,” siblings Jack and Kelly, during the summer of 1969, the year man first stepped foot on the moon.

Thurber never sugarcoats or trivializes in this uncompromisingly authentic portrayal of a paperboy and his emotionally distressed sister as they struggle to survive through the last tumultuous summer of the 60s.
The result is a stroboscopic tour de force, and a raw urban psychodrama that is definitely not for the fainthearted.

FROM THE BACK COVER: It's 1969 and the entire nation is waiting for the United States to win the space race and put the first man on the moon. Meanwhile, fourteen-year-old Jack Fisher-- malnourished and battered, abandoned by his father, neglected by his mother, manipulated by his older sister, harangued by his boss, and shortchanged by customers--is delivering newspapers in downtown Pawtucket and trying to keep his family from self-destructing completely.

As the whole world holds its breath to see what will become of the Apollo 11 astronauts, Jack clings to his daily mantra, "Things will get better." But in this poignant debut novel by award-winning short story writer Bob Thurber, things do not get better; they get drastically worse, at space-age speed.