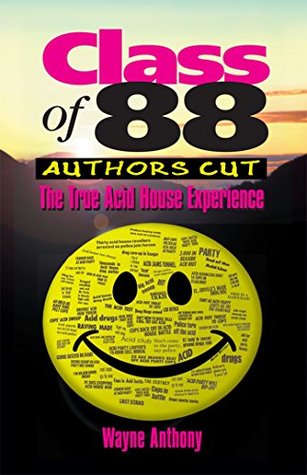 Wayne Anthony was among the first generation of people to experiment with MDMA (ecstasy) in Spain 1987. It wouldn't be long before Wayne and a host of colourful individuals were staging the biggest illegal warehouse parties in the history of Great Britain. What began as small covert after-parties soon developed into full scale extravaganza's as the Summer of Love engulfed the United Kingdom. Thousands of people are accredited for the global expansion of what today is commonly called The Rave Scene but only a few can be deemed its pioneers.

Wayne Anthony, Keith Brooks & Andrew Pritchard (Urban Smuggler Author) formed a company called Genesis'88 and quickly became leading lights during a period affectionately known as Acid House. Their modus operandi was locating huge empty warehouses and lay claim as their own building for one night only. Dozens of fake documents were concocted which enabled Wayne Anthony to convince law enforcement agencies the said properties were hired through proper channels. At times even claiming he was George Michael's assistant manager to dozens of police officers.

The UK's media launched one of the biggest propaganda campaigns to date and demonised them as Public Enemy Number One. This brought promoters head on with police riot squads every weekend as Britain partied like never before in its history. The young Genesis'88 partners were soon earning and spending hundreds of thousands of pounds some even say millions of pounds, consuming vast amounts of drugs and even jumped out an airplane on LSD. This brought the partners to the close attention of organised criminal gangs across London. Wayne was beaten up by psychotic ex-paratroopers, stalked by crooks, held up by armed robbers and kidnapped on different occasions.

Wayne Anthony and partners spent two years breaking and entering warehouses putting life, limb and their freedom on the line. Genesis'88 co-hosted events with pioneering companies such as Sunrise, Energy or Biology. Class of 88 is one man's raw, idiosyncratic and fascinating account of how Acid House changed his life, and Great Britain, forever.

The AUTHORS CUT has been completely updated from the first paperback book and now includes brand new stories from Wayne Anthony’s epic journey into the world of Acid House and the organisers that staged some of the biggest illegal warehouse parties in the history Great Britain. The party promoter was the first amongst his contemporaries to tell his true story to the world. Genesis is one of the founding companies that created and neutered a platform for large-scale all night dance parties. This brought Wayne and partners to the attention of gun totting mercenaries, well known gangsters, bank robbers, and members of parliament, riot squads though worse of all The Media. This true story tells the epic tale of England’s biggest sub-cultural movement that began on the Island’s of Ibiza and Tenerife in 1987. The influence of promoters such as Wayne Anthony can be felt in almost every dance music venue in the world today. Fifteen years after publishing the first paperback book the Authors Cut delves deeper into the history of the worlds most infamous Acid House promoters.