THE HAJJ OF THE GOAT BOY OF KANDAHAR 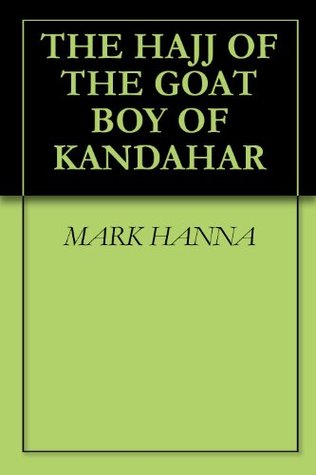 PREFACE
By Larry B. Hayes

The Internet Movie Database (IMDb.com) and the All Movie Guide (allmovie.com) credit Mark Hanna with writing only some 18 film titles. Hanna wrote, sold, traded or shelved many other scripts and stories. His 1957 screenplay, Not of This Earth has been twice remade since the original version release.
Hanna’s 1958 Attack of the 50 Foot Woman, starring Allison Hayes was remade in 1993 starring Daryl Hannah (no relation to Mark Hanna.) The Amazing Colossal Man (1957) served as the screenplay and production catalyst to Attack of the 50 Foot Woman (1958.) Theses two films are the antithesis to The Incredible Shrinking Man (1957) and The Incredible Shrinking Woman (1981.)

Those who don’t know history are destined to repeat it.

Education is the cheap defense of nations.

At the Dawn of the Twenty-First Century

Two years passed since the North Atlantic Treaty Organization (NATO) led International Security Force (ISAF) Coalition had booted the so-called Al-Qaeda and the Taliban back under the roofs from which they came from in the second largest city in Afghanistan, Kandahar (Qandahar.)
The United Nations Security Council (UNSC) established the ISAF Coalition on November 20, 2001, as envisioned by the Bonn Agreement with Resolution 1386 engaging in the War in Afghanistan from 2001 to the present day. Since 2006, the ISAF has been involved in even more intensive combat engagement operations in southern Afghanistan while facing mounting attacks beyond 2008.
Fortunately, neither Al-Qaeda nor the Taliban failed to have the ability to live up to the meaning of the two nouns, namely, remaining strong and being men-of-prayer.
The caves contain people who try to survive living in a struggling and teetering economy in a war zone. Multi-national soccer matches supervised by troop configurations from the European Union and NATO continue a perception of normalcy amidst substantial civilian and military casualties from intensive combat operations.
The ISAF Coalition was initially charged with securing Kabul and surrounding areas from the Taliban, Al Qaeda and other factional warlords, so as to allow for the establishment of the Afghan Transitional Administration headed by Hamid Karzai. A still bewildered United Nations signaled to Al-Qaeda and Taliban warlords to "please get along" with the Loya Jirga, a people trying to yell their way in the grand council called in Afghanistan.

Meanwhile, an old goat-herder and his grandson did what they do best for their personal economy. Their lives are the subject of this novella.

OTHER WORKS BY MARK HANNA AVAILABLE FROM
AMAZON.COM:

ATTACK OF THE 50 FOOT WOMAN AT SCHWAB'S DRUGSTORE